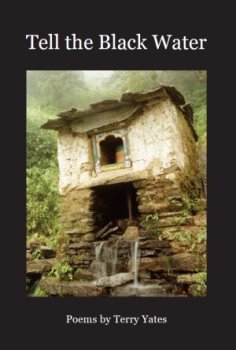 The poetic world that Terry Yates evokes in Tell the Black Water is a world of physical presences, which sometimes stand for themselves as object, place or event and which often point the way to symbolic landscapes, distinct in their language and life affirming in their imagery.

While the physical geography of the poems is that of Western Australia and the Central Tablelands of New South Wales it is the emotional geography around a life’s events—love, birth, grief, inspiration, loneliness, work, home and belonging—that the poems also seek to speak.

There is a range of poetic forms in Tell the Black Water influenced by poets such as Wallace Stevens, Emily Dickinson, Gerard Manley Hopkins, Gary Snyder, poets of mystic traditions and the Chinese Tang Dynasty and songwriters such as Robbie Robertson and Robert Hunter.

This section of the website will include a few poems from the book as well as new poems.