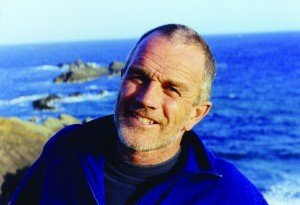 Terry Yates was born in Lithgow, New South Wales, in 1954. He has worked as a gardener, youth worker, labourer and is now a retired high school teacher.

He has written poetry since 1971 and been published in several small magazines and presented his poems in a range of venues..

After living in Western Australia for thirteen years he now lives in his grandfather’s old house at the foot of a mountain in Kandos, NSW.

Apart from school teaching he has a music program From the Mud to the Stars on community radio. (See playlists in Radio Section)

He won the San Francisco Beat Museum Poet of the Year (2008) for his poem Letter To Jack.

Photo in front yard near frog pond with objects and symbols

with childhood photo – by Stephanie